The Sea of Knowledge – Chapter Nine 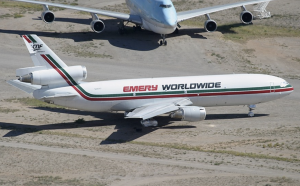 In January of 1986, I was employed as a production assistant in Los Angeles, on a TV commercial for the international expediter Emery Worldwide. The commercial was directed by Joseph C. Hanwright.

Although his name is not well-known today, Joe Hanwright was a talented director/cameraman who pioneered a genre of television commercials that was widely copied in the days before the internet: exciting, patriotic, big budget spots for beer manufacturers, with many quick edits, featuring trucks and truck drivers rolling their rigs, coast to coast across America. The same basic idea was recreated in this thirty-second commercial, to demonstrate that Emery Worldwide delivered to every location in every country, in every kind of vehicle. The pitch was, “With Emery, it’s as good as there,” and they used a country-western flavored song with corny lyrics to drive this message home.

Hanwright’s producer was a young woman with products in her hair by the name of Lisa Pugliese. Although, I usually preferred working for women producers, as they were often more humane and empathetic than their male counterparts, I took an immediate dislike to her.

Lisa decided to put me in charge of the acquisition of some of the Emery Worldwide vehicles that would be “starring” in the commercial. A novice with all things automotive, I had only had a driver’s license for about 24 months. I had never even replaced and oil filter. I knew a little bit about film production, but almost nothing about (and had no interest in) automobiles.

Far more importantly: I knew exactly what I did not know – and I knew I wasn’t qualified for the task.

On her call sheet, it said “production assistant” next to my name. What Lisa needed was a “transportation coordinator” – but she was too inexperienced to know it.

I explained to Lisa that I was unqualified for the job and enumerated the many facts supporting my case. I recommended that she hire Tommy Adams and gave her his phone number. Tommy Adams lived a few hours north, in Paso Robles and he was the best motion picture transportation coordinator with whom I’d ever worked. He was most producer’s first call for this job. Tommy was fluent in vehicles, highways, weight limits, and vehicular codes. He had both the organizational skills and the necessary mechanical knowledge.

But Lisa was unwilling to pay Tommy’s rate and didn’t think she needed his help. She naively expressed her confidence in my ability to manage the job.

In industry parlance, this is called “being cheap.”

This only increased my anxiety level, for I knew full well that I didn’t have a clue. Sadly, it was only a matter of time until fate would prove me right.

For this television commercial, the art department had emblazoned the client’s logo, “Emery Worldwide,” as large as possible on the side of a fifty-three-foot-long big rig trailer. This trailer was to be pulled by a brand-new, specially decorated Volvo semi-truck tractor, supplied through my arrangement with a vice-president of corporate relations at Volvo headquarters in North Carolina, and transported across the continent to our location on the Pacific Coast on the back of a flatbed truck.

On Tuesday morning, January 28, 1986, just after sunrise, a flatbed delivered the brand new, camera-ready “hero” white Volvo tractor. It was rolled of the transport vehicle and out into a parking lot outside Los Angeles International Airport, where the car prep crew began polishing and buffing the exterior, getting it ready for the shot.

But when the Volvo tractor and big rig trailer were finally united, it was quickly discovered that they had incompatible braking systems – the trailer had air brakes and the tractor had a different kind. There was no way this tractor could pull this trailer. It was a huge mistake, for which I was to blame. The resulting delay cost tens of thousands of dollars an hour, as they stood around trying to figure out a solution.

Lisa Pugliese was furious with me for having made such a stupid mistake. I made every effort to refrain from telling her, “I told you so.” One wondered how many times Ms. Pugliese would fall into the sea of knowledge without getting wet?

Prior to that moment, I was not even aware that there were different kinds of braking systems. I really knew less about brakes than practically any other person on the crew. My original instincts we’re right on – I really was in over my head.

Filming stopped and everyone climbed into the half a dozen motorhomes that served as our offices, bathroom, and green rooms, to watch some television and eat breakfast burritos, waiting until the next shot was determined. It wasn’t even yet nine in the morning and we’d already hit a major roadblock. I was burdened with the knowledge that my mistake had delayed the day’s work.

As the film crew and the advertising agency sat around in the motorhomes, munching on breakfast burritos, and trying their best to look hopeful about the shoot, all eyes were trained on the television set, with which each motorhome was equipped.

We chewed our burritos and stared at the tv screens. And right before our eyes, on national television – the Space Shuttle Challenger exploded.

It was such a shock!

Everyone was simply stupefied. Some people sat open-jawed. Some wept. Others stared blankly. For several minutes no one said a word.

No photography was accomplished that morning. No one could get it together to work. A few hours later the caterer showed up and set up the lunch. But very few of us had any appetite.

Categories: I Am the Light, He is the Shadow.
« The Magician – Chapter Eight
The All-Star – Chapter Ten »