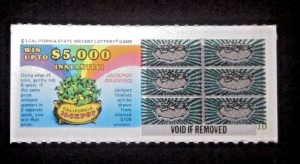 On Thursday, October 5, 1985 – the historic first day that the California State Lottery began selling lottery tickets in every liquor store and gas station in the state – I was working as a production assistant on a soundstage at Raleigh Studios in Hollywood. Captivated by the novelty of the occasion, all of the grips and electricians had stopped and purchased several dozen lottery tickets on their way to work that morning.

It was the last day of the shoot – the wrap. My job including sweeping the stage at the end of the day, after the crew went home.

The floor of the cavernous soundstage was littered with hundreds of scratched-off, losing lottery tickets, which I dutifully removed to the dust bin. As a production assistant, I was then working for a flat rate of $125 a day. The retail value of these discarded lottery tickets was more than I earned in a month.

It was a moment of clarity. A few days later, I would start another job for another production company – that’s the life of a freelancer.

I had a few skills my fellow production assistants did not. In my youth, I was an amateur Super8 mm filmmaker and had a hands-on experience shooting and editing (albeit “narrow-gauge”) motion picture film. I even won an award in a student film contest. I’d been involved in a children’s theater for much of my childhood and had experience in lighting, set construction, painting scenic backgrounds, stage management, and acting. As a teenager, I had managed a staff of volunteers at my local community radio station. In my few years in Hollywood, I’d worked as a production manager on several student films – one of which was nominated for the Academy Award. I was already a competent, though inexperienced production coordinator.

As a professional production assistant, I spent most of my time dumping trash cans, filling ice chests with soda, and running errands – often fetching cappuccinos, or picking up the director’s dry cleaning, or other equally pressing matters.

When the caterer showed up on location or the soundstage, it was part of my job to help him set up all the tables and chairs and get ready to serve lunch. I can’t seem to remember the name of the catering company they hired when I worked as a production assistant at Harmony Pictures in North Hollywood, in the early 1980s. But I shall never forget Rudy, the fellow they sent to set up and serve the meal. He looked like a character right out of a Federico Fellini film: impossibly French, tall and thin, with an exceptionally long and prominent nose, which was intricately detailed with spider veins. He wore a red kerchief pulled through a ring around his neck and dressing in chef’s whites.

I was young and eager to help him. Rudy looked so unbelievably sorrowful and world-weary; you couldn’t help but notice. What, I wonder to myself, was his original ambition when he came to Hollywood?

Rudy knew precisely how he wanted everything setup and calmly implored me to pay close attention to his every instruction. “Please be so kind as to set up the tables like this,” he would say, almost patronizingly, in his heavy French accent.

“Please be so kind as to arrange the chairs in this manner – thank you.”

“Please be so kind as to place the tablecloths like so.”

Rudy had the saddest face I ever saw – sadder than the face of clarinetist Pee-Wee Russell or Abraham Lincoln. It was the face of a man had lived through an enormous tragedy. I never had the courage to ask him about his past. His brow was permanently furrowed. He looked like he’d cried a thousand tears.

One of the freelance production coordinators who booked me was a young woman of Chinese extraction named Lucille OuYang. She’s a successful first assistant director, today. She hired me on a lot of TV commercial jobs at Harmony Pictures in North Hollywood. Thom Tyson and Stuart Gross ran the company and their stable of directors included Rob Lieberman, Haskell Wexler, Michael Dolenz (Micky of The Monkees), Keith Mason, and Bob Reagan.

The fish stinks from the head. Harmony Pictures was a fetid working environment in which the male executive producers were having sex with female production assistants half their age. Lucy OuYang was very good at her job, but she was a narcissist, and at times robotically unawake in the emotional realm – like Mr. Spock or Data on Star Trek.

She soon realized that I had skills beyond dumping trash cans and loading ice chest, and soon began exploiting these to her advantage. Although my title was still “production assistant” and my rate was still $125 a day, flat, I began doing the job of an assistant production coordinator.

Unfortunately, Lucy was no fun, and it was kind if a drag to work for her. But she did an excellent job mentoring and educating me in the job of production coordination, for which I am forever indebted.

Soon, Kathleen Hughes, a prop woman whom I loved and trusted, who worked with us at Harmony Pictures, took me aside and told me, “Look: you’ve got to stop working for Lucy ­­– life’s too short, it’s making you too miserable.” And she was right.

Lucy, and the other women production coordinators for whom I was working, shared in common a belief that men were not detailed-oriented enough to “wrap a job.” They believed that only a woman could do it right.

“Wrapping a job” involved accounting for every penny spent of the shoot, producing a receipt or invoice for every single expenditure, however minute or inappropriate, and preparing these documents and the “wrap budget” for the auditors. It’s monotonous, detailed accounting work. A lot of people found the task of accounting for a couple of million dollars, to be a daunting one. My great-grandfather was a gifted mathematician, a skill that he passed on to almost all of his children, grandchildren, and great-grandchildren, myself included.

Soon the women in the office were in incredulous. “Adam can wrap a job!” they whispered to one another in disbelief. It was as if they had discovered that I could spin straw into gold.

For me, wrapping a job was no biggie. I easily memorized the 1,000 lines of the AICP budget knew the form by heart. I can still recall, thirty years later, every crew member’s rate. 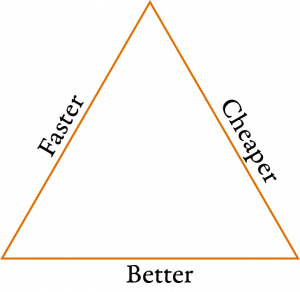 The quality triangle has three vertex points, “Good,” “Fast,” and “Cheap.” You can pick any two points, at the exclusion of the third – but you can never have all three.

If you want it good and cheap, it’ll take more time. If you want it fast and good, it’ll cost more money. If you want it cheap and fast, it probably won’t be very good. Like Newton’s Laws, these are constants in every motion picture equation.

In the 1980s, it was not uncommon to find oneself working on a tv commercial where the client’s objective and/or schedule were so ambitious that money was simply no object. Jobs with too many undefined variables were usually bid on a strictly cost-plus basis.

Just a few days after I’d swept up all those discarded lottery tickets, it was the first day of the 1985 National League Championship Series – Wednesday, October 9, 1985.

We began pre-production on a tv commercial for Coca-Cola that was scheduled to air nationally during the World Series, fourteen days later. The big challenge was that the spot was supposed to star some of the major-league managers whose teams weren’t going to make it into the World Series, and that wouldn’t be determined for another week, until the end of the championship.

The spot was awarded to Bianchi Films of New York City. Eddie Bianchi is a television director known today for his work on the series Deadwood (2004) and Boardwalk Empire (2010). In 1985, he was a highly sought-after commercial director who had recently directed the opening credits of NBC’s popular The Cosby Show (1984-1992). He was voted 1985’s “Best Commercial Director of the Year.”

The 1985 National League Championship Series concluded on Wednesday night, October 16, 1985, with the Los Angeles Dodgers losing to the St. Louis Cardinals. Dodger fans were not happy – their beloved team was not going to the World Series. 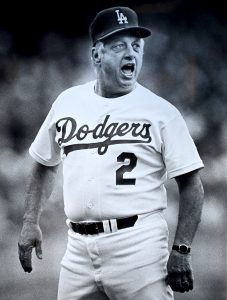 Consequently, that very evening we dispatched twenty-five-year-old Cheryl T. Smith, a trusted but nevertheless inexperienced production assistant, to Dodger Stadium to hand-deliver an offer to the Dodger’s manager, Tommy Lasorda, to appear in the commercial.

Ms. Smith used all her cunning and charm to get into the filled-to-capacity stadium, where 55,000 fans were watching the game, and locate Mr. Lasorda’s limousine. There, she patiently waited for several hours until he finally arrived, disappointed and exhausted after losing the league championship.

We could not have picked a worse night to approach him – it was really bad timing. But somehow, for reasons known only to himself, in the wee small hours of the morning, Tommy Lasorda agreed to appear in the commercial.

Three days later, on the night of October 19th – first night of the World Series – we were shooting the spot at Anaheim Stadium with Mr. Lasorda; Billy Martin, the manager of New York Yankees; and Earl Weaver, the manager of the Baltimore Orioles. It was an incredible feat of scheduling and serendipity to get these three extremely busy men – and their wives, who were also appearing in the spot – in the same place at the same time for several hours, on the first night of the World Series.

Mr. Martin smoked small Macanudo cigars throughout the filming. He was escorted by a woman who, with her hairdo, was nearly a foot taller than he was. She may well have been his wife. Four days after the series ended, the New York Yankees fired him.

One take was ruined when Earl Weaver announced matter-of-factly, to no one in particular, “I need to take a shit.” It broke up the crew and it was several minutes before we could contain our giggles.

We got the last shot in the can and dispatched a production assistant to race the exposed negative to Foto-Kem, the film lab in Burbank, in time for the last bath. 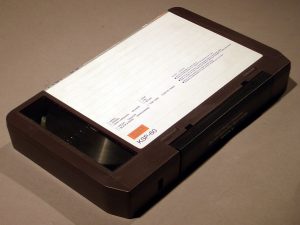 It is one of the idiosyncrasies of the motion picture industry that the transportation to the laboratory of the invaluable and irreplaceable film negative – the product of a day’s work and an expenditure of several hundred thousand-dollars – is always entrusted to the least experienced, lowest paid, least well-fed, and well-rested, and usually most juvenile member of the crew. But that’s how it’s done.

In those days before the internet, tv commercials were dubbed onto 3/4″ video cassettes and delivered overnight by Federal Express to broadcast stations. Four days later, on Wednesday, October 23, 1985, the spot aired nationally – just four days before the last game of the 1985 World Series.

Categories: I Am the Light, He is the Shadow.
« The Largest Soundstage in Northern California – Chapter Six
The Magician – Chapter Eight »