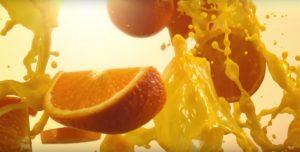 Table-top cinematography is a specialized genre of TV commercials – a kind of food pornography – featuring up-close and intimate, ultra-glamour shots that make you want to eat what you see.

“I make my living basically taking food and painting a reality with it,” Michael Somoroff, a tabletop director with MacGuffins Films in New York, told the New York Times. “And if I succeed in a given moment, you’re going to go buy that dish because you’re going to identify with the experience we’ve created. To do that with something as banal as food is the challenge. I mean, it’s easy to go out and shoot a beautiful sunset or a beautiful girl. They’re beautiful, O.K.?”

For many of these advertisers, the tv commercials are so essential to their corporate survival, that they can’t stay in business without them. “If you come off television, when your sales dip, it takes a long time to get them back to where they were before you stopped advertising,” said a vice president for marketing at Sizzler, Michael Branigan. “There are a ton of studies that show this. You lose brain share of your customers, and it is expensive to get revenues up again. If I stopped advertising, Sizzler’s revenue would be down, minimally, 10 to 15 percent for the year.”

Fast-food, pizza, and casual-dining chains – what they used to call “doughnut and coffee restaurants” spend about three percent of revenue on advertising. Consequently, there’s a lot of money to be made in this industry.

Many of the TV commercial directors were conspicuously wealthy and at times, aspired to royalty – even though no one ever recognized them in public and nobody outside of the advertising world had ever heard of them. They drove Rolls-Royces, DeLoreans, and BMWs, got two-hundred and fifty-dollar haircuts, wore five hundred dollar “Bill Cosby” sweaters, and lived in expansive McMansions, and drank cases of Perrier water in green glass bottles. 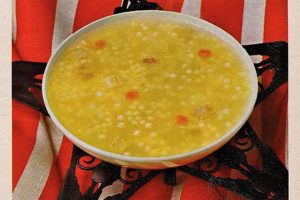 The infamous bowl of Campbell’s soup with the hidden marbles

In 1970, the Federal Trade Commission settled a lawsuit against the Campbell Soup Company. The commercial production company making their broadcast spots, had put glass marbles in the bottom of a bowl of vegetable soup, to make it look like there were more vegetables than were actually found in a can of soup. The truth-in-advertising statutes require food stylists on tv commercials, in most instances, to use the same ingredients in the same proportions, as are used in the packaged product.

However, this doesn’t work for ice or ice cream – the product melts too quickly under the heat on motion pictures lights. If you’re shooting a soft drink or a cocktail in a glass over ice, the ice cubes are made of silicone or plastic (and cost $300 – $500, each) so they won’t melt or tinkle. Some food stylists use a mixture of high-fructose syrup and lard to make something that looks like ice cream but doesn’t melt as fast. Others use conventional mashed potatoes. 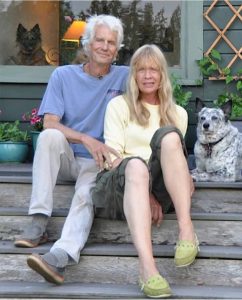 Phil Austin of The Firesign Theater and his wife, food stylist Oona Austin

When you make a television commercial about something that is edible, the food or drink that’s actually photographed, is painstakingly prepared by a professional food stylist who makes it look as appetizing and attractive as possible. This is an exacting and specialized job that only a few truly master. And just like every other job on a motion picture set, one or two individuals in the industry distinguish themselves as being noticeably better at their job than all their constituents. Oona Austin was one of the first choices for the job of food stylist on tabletop TV commercials.

Early in my career, as a production assistant in Los Angeles, when I found myself working on a crew with Oona, I would surreptitiously find a way to get myself assigned to her team where, in the safety of her enclave, I would be sheltered from the slings and arrows of production. Oona was a great teacher, so I learned a lot of really important things about the food stylist’s job, which served me well later, when I was producing tabletop commercials. For instance, Oona showed me how to mix Elmer’s glue with milk, so the milk wouldn’t look thin and pale under the bright motion picture lights.

One day, I was instructed to use an air compressor to remove all the dust from the contents of several dozen boxes of Kellogg’s Apple Jacks breakfast cereal. Then I sprayed each individual piece of cereal with shellac, so that when it was photographed falling through the frame in super-slow motion, there wouldn’t be any dust or crumbs visible in the shot.

Another specialized job in food photography is that of the “hand model.” The hands that you see in television commercials holding forks, knives, bottles, or pouring a glass of beer, or holding a credit card – belong to a few of the busiest people in the industry, whose faces are never seen. In my time, the best hand model on the west coast was Bill Karp.

I remember that Bill Karp was on that Apple Jacks commercial I did with Oona Austin in Los Angeles, thirty-five years ago. Oona sent me to the Irvine Ranch Market in West Los Angeles to pick up a case of the most perfect large red delicious apples I’d ever seen. The film sped through the camera at the highest speed, to achieve a super-slow-motion effect.

As the bright red apples fell through the frame, Bill Karp swung at them with a razor-sharp eight-inch chef’s knife, cutting each apple perfectly in half. On several takes, I actually saw Bill slice through the stems of several of the apples, he was that precise.

As Dizzy Gillespie told Pete Hamill, “The professional is the guy who can do it twice.” One of my favorite crew members was a prop woman named Kathleen Hughes. She was the daughter of a prop man. Her brother Kevin was a prop man. Her sister Maureen worked with the greatest table-top shooter in the biz, the legendary Elbert Jay Budin. She was his producer and “long-time companion.” Technically, as Professor Tom Lehrer would say, they were living in what, in those days was known as “sin.”  (Some readers may be too young to remember “sin,” but you can Google it.)

This unconventionality was characteristic of Elbert Budin. Where other TV commercial directors were to be addressed as “Mr. So-and-so,” he was just “Elbert” to everyone on the crew. If you sat next to him on an airplane, you’d never know he was the best table-top shooter in the industry. With his long white hair, enormous untrimmed white beard, he looked more like a philosopher, or a classical composer, or the wizard in an Arthurian Legend.

Where other directors were met at the gate by a limousine driver holding a sign with their name, as they deboarded the plane, Elbert Budin flew into LAX, rented his own mid-size Mercury Mercur from Hertz, and drove himself to the production office in Hollywood. In my limited experience, this was simply unprecedented.

Elbert’s father was a Russian born, Yiddish-speaking physician, who immigrated to the United States with his parents, in 1894, when he was still a child. Elbert was born in Philadelphia in 1928. He was a potter who began working with the camera and lights to photograph his own ceramic pieces for ads and catalogs. It wasn’t long before other potters were hiring him to take pictures of their work.

In the 1950s, Elbert moved to New York City and began his long career creating images for advertisers. In 1971, Elbert started Ampersand Productions, in a huge studio at 424 W. 33rd Street in Manhattan, with director Bob Giraldi, and Phil Suarez, a former producer at Pappert, Koening, and Lois, (the advertising agency that made the Clark Gasoline commercial with the flying car, in 1966).

“If tabletop has a vocabulary, Mr. Budin coined many of the words.” wrote David Segal, in the October 8, 2011, issue of the New York Times:

He popularized prep shots (a kind of back story for the product, typically ingredients being chopped), crave shots (self-explanatory) and hero shots (a glorifying farewell look at the product, usually in the last few seconds of the ad).

And it is from Mr. Elbert that we get one of the lasting visual tropes of American advertising: flying food. Ever since he launched an orange through a thin sheet of water for Sunkist — showing in gorgeous slow motion the hole left by the fruit — everything that you can put in your mouth and store in a pantry has been hurtling through the air. 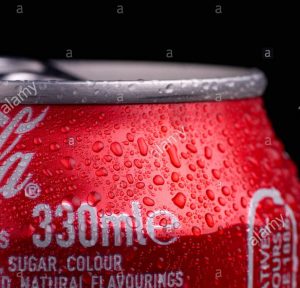 “‘Food has to be in motion to have character,’ says Alex Fernbach, another Budin acolyte, who now works at Arf & Company, a studio in Hoboken, New Jersey. ‘It gives food a personality.'”

With the camera mounted on a swinging jib arm, Elbert was the first guy to shoot corn flakes falling through the frame in super-slow motion. He liked to place the lens just inches from a can of Coca-Cola, so you could see every droplet of water beaded on the surface of the aluminum can. His cinematography brought adventure, alure, and appetite-appeal to otherwise routine menu items.

“Elbert wanted the product to have a three-dimensional feel,” said his former cameraman, Santiago Suarez. “He wanted you to smell it.”

Advertising agencies would literally wait online to work with Elbert. His director’s fee at the time, was probably forty or fifty-thousand dollar a day. That was a lot of money (Joe Pytka was reportedly charging sixty-thousand dollars a day) but Elbert’s award-winning work was so exceptional, his services were always in great demand.

In the years I worked on the production of tv commercials, men who worked for the advertising agency would request assistance in enabling their sexual objectives – like asking me to arrange for one of our female production assistants to “come to their hotel room after the shoot.” I would politely make it very clear that this would not be possible – that all of our crew members had to be back on the set, early the following morning and would be needing their sleep that night. Other times, they’d want my help contacting a professional sex worker and I’d direct them to the hotel concierge.

Once upon a time, on one of Elbert’s jobs, the shoot was way behind schedule and well into overtime. But one of the men on the set from the advertising agency – an account executive, who should have been paying attention to the tens of thousands of dollars in overages – had something else on his mind.

While Elbert and the crew were struggling to complete a difficult shot, this guy was talking about heading back to his hotel room and “getting laid.”

“I really want to get fucked tonight!” he told the assistant director enthusiastically, “I mean, I am so ready – I’d really like to get fucked!”

It was close to midnight. The crew was in double-time. Elbert Budin was sitting on the camera dolly looking through the lens listening to this account executive’s incessant chatter. Without removing his eye from the eye piece, he quietly deadpanned to the camera assistant standing by his side, “Tell him he’s getting fucked right now.”

Categories: I Am the Light, He is the Shadow.
« The Closer – Chapter Fifteen
Goodnight, Mr. Sun! – Chapter Seventeen »