The Monkeys’ Day Off

In my misspent boyhood, I was always so distracted with my own peculiar interests, urges, and compulsions, that I never really had a plan. I learned that sometimes it’s better to follow the path of least resistance, like the river, even if it makes you crooked. Destiny is affected by the accidental, the random, and the insignificant, as well as the intentional. 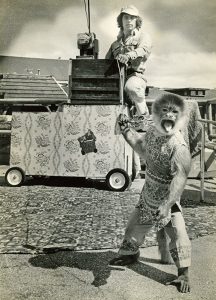 When I was a kid living on First Street in Pacific Grove, California, our next-door neighbor was an organ grinder.

For more than four decades, Phil could be found at the entrance to Monterey’s historic Fisherman’s Wharf, turning his hand-cranked barrel organ while his monkeys collected coins from delighted tourists. It was one of the big kicks of my boyhood to walk down the railroad tracks to the wharf, beckoned by the distant music of the barrel organ, and await my turn to hold out a nickel. The sensation of the monkey’s tiny hand brushing against my fingertips as he deftly removed the coin from my grasp never ceased to both thrill and terrify me.

Fifty years ago, when I knew him, Phil was a long–haired, rather bohemian fellow in his twenties, with sideburns and a waxed mustache. It’s not surprising that Phil worked alone with his monkeys. He was kind of a scary guy and we rarely spoke to him. In the early 1970s, Phil shared his home with his two capuchin monkey co-workers, Jimmy and Gomez.
The monkeys had their own bedroom, with an enormous cage set in front of the widow. If you climbed up on the roof of our garage, you could look into the monkeys’ bedroom window, just a few feet away.

One fateful day in my thirteenth year, believing that the neighbors were not at home, my brother and I climbed up onto the roof of our garage. We hoped to catch a glimpse of Jimmy and Gomez while off duty, in their bedroom, doing whatever it is that professional monkeys do when they’re not plying their trade. Moments later, I happened to glance into the next window. I saw that Phil was not only home, he was not alone and he was not standing up. Although I was a kid, I fully understood the implications of this observation as he glared at me through the bedroom windowpane. Naturally, he reported the “incident” to my disappointed mother. As a consequence for my indiscretion, I was grounded-to-home from all activities except public school and, rather arbitrarily, classes at the local Children’s Experimental Theater.

So, like the river, I chose the path of least resistance. In order to escape house arrest after school, I began volunteering for as many activities as possible at the Children Theater: acting, fencing, setting lights, building sets, and painting scenery. Through my high school years, I worked at the theater full-time and soon it was my livelihood. This twist of fate began my path to performing on stage and ultimately to my current occupation (the one in which Folksongs travel through History and History travels through Folksongs).

Categories: Uncategorized.
« Mythology and the Oral Tradition
The Little Flowers of St. Francis »