Showmanship: The Persuasions Killed It 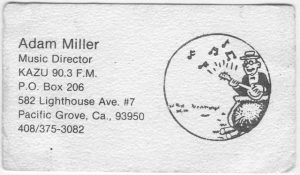 In the sleepy seaside town where I grew up, I acquired a reputation for being an obsessive collector of old phonograph records. While still in grade school, I could often be found cruising the bins of the local record stores and Lighthouse Avenue antique shops. Each weekend, I would prowl the garage sales listed in the Monterey Peninsula Herald, in search of vintage records. For a mere pittance, many of my classmates were grudgingly persuaded to clandestinely sell me their grandmother’s collection of dusty 78-rpm records.

Back in the 1970s, before NPR tranquilized the airwaves with its homogeneous corporate-centric programming, the left-hand side of the FM dial was populated by small, listener-supported, non-profit community public radio stations. These eclectic regional stations featured local volunteer programmers broadcasting recordings from their own personal record collections or playing albums from the station’s vast music library.

The Great Silence Broadcasting company, a hometown non-profit corporation, signed the tiny ten-watt KAZU 90.3 FM onto the airwaves in the summer of 1977. I was one of the usual suspects rounded up to host a radio program. My show was called “Yazoo Follies.” Every Thursday at 9:00 p.m., I played obscure 78s from my own collection.

The Comprehensive Employment and Training Act (CETA) was signed into law in 1973 by President Richard Nixon. CETA provided funding for neighborhood arts programming. Somehow, through a CETA grant, I was hired as KAZU FM’s full-time Music Director. The job entailed curating and expanding the station’s growing collection of vinyl LPs and working with the volunteer programmers who played those records on the air.

One of the tragedies of this lifetime is peaking too early in one’s career. As a 19 year-old professional Music Director, I was getting paid $800 a month, which was a fortune in those days. I didn’t drive. I paid $200 a month rent for a flat overlooking Lover’s Point. I ate all my meals in restaurants. I was too young to realize it at the time, but it was the best job I would ever have. A complimentary copy of every single new non-commercial record release crossed my desk on its way to KAZU’s music library. It was my job to listen to the recordings, integrate them into the station’s collection, and share them with the volunteer programmers who would most enjoy their musical offerings.

There were so many of these small, listener-supported, community radio stations in the USA in those days that, in 1975, they organized under the banner of the National Federation of Community Broadcasters (NFCB). Each summer the NFCB held a national conference where representatives from all these far-flung North American radio stations could gather and commiserate. In the summer of 1980, the NFCB held its national conference on the campus of a small college in Worcester, Massachusetts. On shoestring budget, KAZU FM’s station manager Mathew Dension and I were sent as our station’s representatives.

It was summer, so there were no students on the campus. We were housed in the cinderblock dorms and fed in the college cafeteria. Meetings were held in classrooms and lecture halls. I was a shy teenager and probably the youngest conference attendee. I met a lot of my public radio heroes – people I had only read about or heard discussed in community radio folklore, many of whom have since passed away. A fellow from the FCC (who was probably the only person there dressed in a suit and tie) told us, “If Ronald Reagan was elected president in the upcoming election, none of you will have your job next year.” He was mostly correct, but that’s another story. 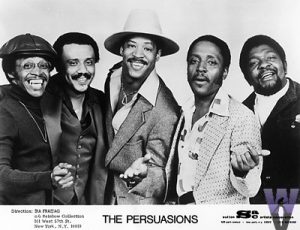 Now, I already knew about The Persuasions, an a cappella vocal group that began singing together in Brooklyn, New York, in the mid-1960s. In the days before the A cappella Revival, the five African-American vocalists in this quintet comprised the best and, at that time, perhaps the only unaccompanied vocal group on the circuit. Their eclectic repertoire spanned the genres from doo-wop to soul to popular songs. And they were great performers and prolific recording artists. In the late 1970s, their music didn’t really fit in with the formulaic rock and roll music programming favored by most commercial FM radio stations. The Persuasions found a large part of their audience through community radio stations.

Lo and behold, The Persuasions were booked to entertain this assembly of community radio geeks at the NFCB conference. Practically every community radio station manager and music director in the country were consolidated in a solitary location for this weekend in Worcester – the very people responsible for making sure The Persuasions’ albums were getting radio airplay. I’m sure this salient point was not wasted on the band members or their record label.

The Persuasions were scheduled to perform an outdoor concert in a tree-shaded park near the campus that very afternoon. Nobody wanted to miss their show, so we all headed for the park, en mass. But, curiously, there was no stage or sound system there: no seats or bleachers, no evidence that a concert was planned at all. The band was nowhere to be seen. It looked as if there had been a scheduling mistake; perhaps it had only been a rumor.

The audience waited in the park, cooling their heels in the muggy summer air. The natives were getting restless. Several frustrated folks explained to no one in particular, that they were ready to throw in the towel and go back to the conference. It was evident that there would be no performance. It looked like we had been had.

Just as we were turning to depart, a white cargo van sped down the paved road and drove right into the middle of this large grassy area in the park. Before the van came to a complete stop, the two back doors suddenly flew open and, as I remember it, there were large speakers mounted on the inside panel of each open door. In seconds, the five singers leapt out the back of the van, holding microphones, dressed in tuxedos and shiny black patent leather shoes, singing in glorious, amplified five-part harmony.

The Persuasions performed for an hour in that grassy park and they just killed it. They were sensational. It was one of the greatest theatrical entrances I ever witnessed. Talk about showmanship. To this day, I can’t think of its equal.

In the wee small hours of a foggy morning in May of 1997, a volunteer programmer was closing up the KAZU FM studios for the night and casually dumped an ashtray into a waste paper basket. A few hours later, the KAZU studios and the colossal phonograph record library were engulfed in flames. To the best of my knowledge, not one album survived the fire. I knew that record collection intimately; it was like an old friend and I committed much of its contents to memory. I still awaken in the middle of the night, out of a dead sleep, suddenly recollecting a singular rare, one-of-a-kind, record that was lost in that fire.