Running Away From Home 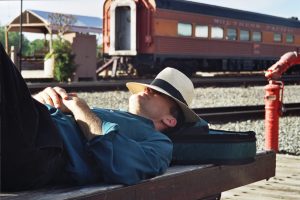 Running Away From Home is a concept that never goes out of style. Our folksongs and literature are full of stories about children (and adults) running away from home. It seems to be one of the kernels of American identity. Perhaps this is because so many of our ancestors really were running away from home when they first came to North America.

As a child, I harbored dreams of escaping the expectations, anxieties, and responsibilities of life at home and, like Huck Finn, leaving it all behind. I think it’s perfectly natural to fantasize about running away from home. Some folks actually try it. Some folks pull it off. And some of us turn it into a profession.

In so many traditional folksongs, the protagonist is either at home (and wishing they were away from home) or away from home (and wishing they were home, again). As an itinerant entertainer, I have spent most of my adult life running away from home. Every morning, I awaken at sunrise in an unfamiliar motel room, get in my rental car and flee to the next location. Every day spent at my Oregon homestead is a countdown until the departure for the next tour. And every day on-the-road is spent anxiously counting the nights until I return home. I think that’s probably true for a lot of folks in the travelling life. It’s one way to constructively channel all that running-away-from-home energy into an intentional (and sometimes even profitable) Great Escape.

Mark Twain said, “Travel is fatal to prejudice, bigotry, and narrow-mindedness, and many of our people need it sorely on these accounts. Broad, wholesome, charitable views of men and things cannot be acquired by vegetating in one little corner of the earth all one’s lifetime.”

Categories: Performing.
« Nice Work If You Can Get It
The Turning of the Tides »