Mythology and the Oral Tradition

The British archaeologist Sir Charles Leonard Woolley said, “We need not try to make history out of legend, but we ought to assume that beneath much that is artificial or incredible there lurks something 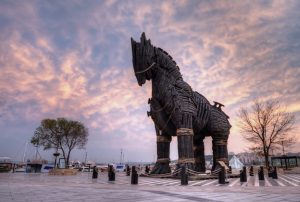 In an oral tradition, a story or song is modified in the process of its transmission from one person to another and from one generation to the next. This transformation is known as the “folk process.” Somehow myths endure the inevitable evolution of the folk process better than the actual historical events they chronicle.

Harvard Folklore Professor Albert Lord believed that story patterns had to be “supra-historical” to have such significance outside the historical process. “Their matrix is myth and not history; for when history does have an influence on stories, it is, at first, at least, history is changed, not the stories.” That is to say: story pattern is ultimately more important than getting the facts right.

A fragment of history, so inconspicuous that it might be overlooked, sometimes remains attached to a story for a millennium, inexplicably surviving the ever-evolving folk process of oral tradition. And the ages.

Whether there is any historical reality behind the Trojan War is still a subject of great debate.

Homer is said to have composed the Iliad (set during the legendary Trojan War) in an oral tradition, centuries before written Greek literature evolved. In this 12,000-line poem, he tells us, “Meriones gave Odysseus a bow, a quiver and a sword, and put a cleverly made leather helmet on his head. On the inside there was a strong lining on interwoven straps, onto which a felt cap had been sewn in. The outside was cleverly adorned all around with rows of white tusks from a shiny-toothed boar, the tusks running in alternate directions in each row.”

The same boar’s tusk helmet is depicted, exactly as Homer described it, in a 3,500 year-old Minoan Age fresco painted on the wall of a residential dwelling in the ancient city of Akrotiri, on the Greek island of 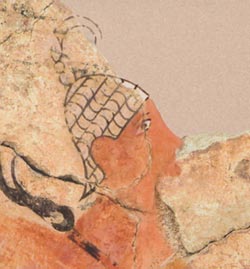 Santorini. The fresco was discovered fifty years ago, buried beneath the ash from an enormous volcanic eruption that destroyed the island around 1600 BC – – 600 years before the alleged Trojan War.

Of the Trojan War, Professor Lord observed, “Fact is present in the epic, but relative chronology in the catalog is confused. Time is telescoped. The past of various times is all assembled into the present performance. Oral epic presents a composite picture of the past.” This phenomenon is widespread throughout the realm of the oral tradition. It is a familiar aspect of our dreams, our memory, and our stories.

Categories: Uncategorized.
« In a Better Place
The Monkeys’ Day Off »