The British archeologist Sir Charles Leonard Woolley wrote, “We need not try to make history out of legend, but we ought to assume that beneath much that is artificial or incredible there lurks something of fact.”

This is likely true of this often-repeated urban legend: 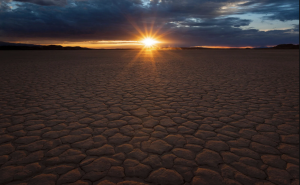 Once upon a time, a film crew was shooting a commercial for a best-selling motor oil at the popular El Mirage Dry Lakebed location in southern California’s Mojave Desert. The thirty-second spot featured a special, one-a-kind, million-dollar prototype high-speed race car.

The crew stayed at the Green Tree Inn, in Victorville. Over dinner in the hotel restaurant, it was discovered that the only person on the crew who had remembered to bring an alarm clock, was Dick Albain, the veteran special effects man.

Dick Albain had been in the business for so long, he’d worked on the Bewitched (1964-1966) and I Dream of Jeannie (1965-1970) tv series, as well as dozens of feature films. He told his fellow crew members that he would take personal responsibility for waking everyone up the following morning.

The call was early so they could shoot the sunrise. At 4:15 am, Dick Albain was awakened by his alarm clock. Quietly opening the sliding glass door of his second-floor motel room, he tiptoed out onto the porch with a lit cigarette between his lips and a quarter stick of dynamite clutched in his right hand.

Stealthily closing the sliding glass door behind him, he peered out into the murky darkness before dawn. He then ignited the explosive’s fuse by holding it up to the lit end of the cigarette. And like a baseball player about to throw a pitch, with all his might, he drew back his right arm – and shattered the plate glass patio door.

He cut himself so badly, he dropped the lit quarter stick of dynamite to the floor, realized what he had done, and instinctively kicked it off the edge of the balcony. It landed on the hood of the one-a-kind, million-dollar prototype high-speed race car parked in the parking lot below, setting the vehicle on fire upon detonation.

The explosion awakened every guest in the motel.

It’s such a good story, it hardly matters if it’s true.

Categories: I Am the Light, He is the Shadow.
« The Big Blonde
Everything is Based on Fate – or Nothing Is – Chapter Two »