In a Better Place 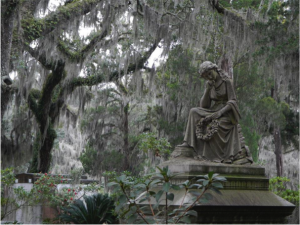 My 44-concert, 15,000-mile, eight-week tour of the eastern United States ended on June 1. As one who ostensibly drives for a living, I have come to appreciate the sheer size of this country. It’s huge. Really. And it’s difficult to grasp the scale from the window of an airplane. One cannot fully comprehend the enormity of North America until one drives across the vast expanse of the continent.

On a typical day on the road, after six or seven hours barreling 70 miles per hour down the turnpike, I arrive in the town where I’m performing that night.

After a long day immobilized behind the wheel of a rental car, I am stupefied. I struggle to transition out of my interstate-induced trance into the countenance of one who is fully prepared to entertain an auditorium full of appreciative strangers.

So, in the hour or so before I load into the venue to do my sound check, unwilling and unable to endure yet another greasy offering from the proverbial roadside diner, I use the GPS device to locate the local cemetery.

There, under shade of a stately tree I find a memorial bench where I can park my carcass and chill. Conjuring my supper out of a brown paper grocery bag, I attempt to shake off the road-buzz, and savor the sanctuary that is the graveyard. I wave to the occasional passing groundskeeper. But no one ever approaches me or asks me what I am doing there. The city of the dead has its own unwritten code: visitors shall not experience unwanted intrusions.

Apparently, I am not the only traveller who has sought respite in the serenity of the graveyard.

In 1867, the 29-year old naturalist John Muir walked from Indiana to Florida, through an American South ruined by four years of Civil War. He recounted his journey in, A 1,000 Mile Walk to the Gulf, published in 1916, explaining how he learned “to sleep in cemeteries to avoid unwanted intrusions while camping alone.”

The marine biologist Edward Ricketts made a similar sojourn through the South in the 1920s. He published his recollections of the trip noting, “I came across John Muir’s thousand mile walk and was very interested in his half century old description of the country I just traveled. Muir’s advice regarding cemeteries proved particularly useful.”

Categories: Uncategorized.
« The Turning of the Tides
Mythology and the Oral Tradition »