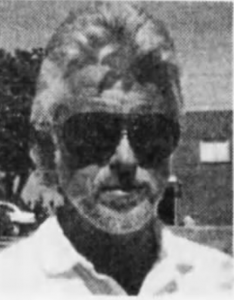 When I worked for James Productions in San Francisco, many of the advertisers for whom we made TV commercials were based in the Midwest. It was an ongoing chore, job after job, driving around in Boyd’s white Jeep Cherokee, searching the San Francisco Bay Area for filming locations that could pass for being in the Midwest. But Boyd hated long drives and sitting in traffic – so much so that he developed a remarkable knack for only selecting locations north of the Golden Gate Bridge, close to his home in San Rafael.

A day of scouting locations with Boyd was so routine that several of location scouts who worked with us, told me stories that corroborated my own personal experiences. The day would invariably go something like this:

They’d spend the morning driving around, checking out prospective locations, with Boyd finding insurmountable problems with every site they visited. Around one o’clock, they’d take a lunch break at an overpriced seafood restaurant. The meal was billed to the job. I have never forgotten Boyd’s heartfelt advice: “When the client is paying for dinner, always order the wild salmon.”

The afternoon location scouting elapsed much like the morning – each location they visited just didn’t work.

Exasperated and feeling a little desperate, around four o’clock in the afternoon, they’d pull the Jeep Cherokee over to the side of the road and Boyd would roll a joint. In that era before legalization, first checking to be certain that there were no cops around, he’d open the windows. Removing a small box of stick matches that he’d pocketed at the seafood restaurant, he’d light the joint and spend several minutes enjoying a smoke.

The resulting cannabinol-instigated change of attitude invariably had a significant effect. Boyd would gaze out the open window, seemingly in contemplative silence.

A few minutes later he would suddenly become quite animated, fumbling for his 35 mm camera. Leaping out of the vehicle, he would exclaim, “There it is! That’s it! It’s perfect!” Holding up two hands to suggest frame lines, he would declare, “This is the master set-up, here. And we get the close-up over here…”

This predictable location-scouting routine occurred with surprising regularity. We always found our location by 5:00 pm. Boyd would place the unsmoked half a joint inside the box of stick matches from the restaurant and put it back in his pocket.

Boyd grew up in rural Washington State. He was raised by his great aunt, Karn and called her his mother. In infancy, he contracted Perthes disease, a disorder of the hip that left his right leg bone shorter than his left. Walking barefoot was painful. Even with a lift in the heel of his shoe, running or playing sports aggravated the pain in his hip. However, riding a bicycle was painless and this became his favorite pastime. He settled in San Rafael, where he had easy access to the many bike trails on Mount Tam.

In his dreams, Boyd was a bird. His business card included a caricature of  himself as a bird. When he left a message on your answering machine, he usually included a little bird call (his friends referred to it as a “Boyd Call”).

In those days, Boyd, twice divorced, lived in a ranch house in Marin County with his girlfriend, Allison, his beloved “Mother Karn,” and Karie, his teenage daughter from his first marriage. I have fond memories of arriving at his home early in the morning to pick him up for a day of location scouting, only to find Boyd – clad nothing but white Jockey underwear – playfully chasing eighty-seven-year-old Karn around the living room.

Every night at sunset, he’d go out into the backyard and wave his hand, hollering at the western sky, “Goodnight Mr. Sun!”

Allison and Boyd were engaged to be married. Boyd wanted some time off from work so he and Allison could take a long-needed vacation on the island of Bali.

Boyd’s best friend was a surgeon. He convinced Boyd to let him perform a surgery that would correct the problem. This would make both of his legs the same length and it would no longer hurt to shoot baskets with his buddies. Boyd imagined himself walking barefoot on the beach in Bali with Allison – without feeling pain.

Boyd phoned me and told me of his decision to have this routine hip-replacement surgery. Ever the professional pessimist, I tried to talk him out of it. “What if the surgery isn’t successful?” I argued. “Who’s going to hire a director in a wheelchair?”

On Monday afternoon, February 4, 1991, I was working as a freelance production coordinator on television commercial advertising Miracle Whip salad dressing. The director, David Wild, wanted to shoot on a particular tree-lined suburban street in Palo Alto, California. To this end, we had collected signatures from every neighbor, obtaining their permission to do so, as mandated by the police department.

I was sitting in the Palo Alto police station, negotiating the terms of a filing permit for the production company, when my Motorola flip-phone began ringing. Excusing myself and stepping into the hallway, I answered the phone. Before I could speak, a grieving voice on the other end blurted out, “Boyd’s dead! Boyd’s dead!”

Somehow, when filling out the paperwork for his admission at the surgery center, Boyd had inexplicably forgotten to disclose that he was taking a prescription medication that thinned the blood. Consequently, he bled to death on the operating table, with his daughter and his girlfriend holding his hands and singing softly into his ears, and his best friend, the surgeon, holding the scalpel.

Boyd was forty-seven years old. He never got to say goodbye.

It was discovered that Boyd had not updated his will. It looked like his estate might go to his second ex-wife, Diane, a local actress, whom he professed to dislike, and had divorced in December of 1988. I imagine there ensued an ugly medical malpractice suit, but I really don’t know. 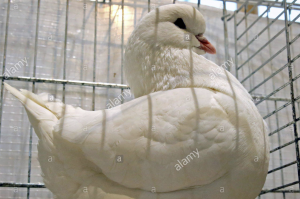 Some of Boyd’s ashes were interred at his family’s plot in Washington State. After his memorial at his home in San Rafael, his heartbroken girlfriend, Allison, scattered some of his ashes at a special location on his favorite mountain bike trail on Mt. Tam. A few months later, she brought a few friends to visit the place where she had stew his ashes – and a white dove was sitting there among the boulders. The bird flew into Boyd’s girlfriend’s lap and enjoyed being stroked, like a cat.

“Is that you?” Allison asked.

Hours later, when they stood up to leave, instead of flying away, the bird alighted on Allison’s shoulder as they walked back to the car. She opened the door, and the bird flew in. She took the bird home, and it became her pet, riding around on her shoulder when took walks in the neighborhood. She never clipped his wings, and he never flew away. She had Birdie for years. 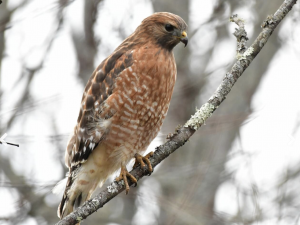 When Boyd died, I was living in a “cozy” 900-square-foot, two-room cabin on the summit of a remote mountain top, 2,000 foot above sea level. The western wall was all windows going up to a twelve-foot-high ceiling.

Thirty feet to the west of these windows was a grove of pines and Douglas fir trees (which usually grow 300-feet tall). Because they were right on top of this extremely windy summit and the soil was nutrient-depleted, they were pygmy trees, less than fifty feet tall. Each night, I would sit on patio and watch the sunset over the Pacific Ocean, through this lovely grove of dwarfed trees.

The week after Boyd died, a red-shouldered hawk appeared in the grove, just west of my cabin and stayed for several weeks. Smaller than an eagle, this is a large bird of prey that has a wingspan of more than four feet and stands two feet tall. In my state of shock, I wondered if it was Boyd, coming back to visit me.

After his death, like a widower who is certain he can replace his beloved partner, I proceeded to work with a series of directors, expecting to find another good fit. It never happened for me. I never found another director with whom I had the kind of rapport I had with Boyd, no matter how many times I tried. A few years later, I got out of the business for good.

In those days, like most commercial producers, my life was mostly about attending to my director’s wants, whims, and concerns, leaving little time for myself.

There were many things about working with Boyd that, at the time, I complained about. Boyd was a hedonist. He was lazy. Rather than attend to our business, he preferred to drink or get high, or play music, or make love, or soak in the hot tub. Work wasn’t the biggest priority in his life.

If you had told me, thirty years ago, that I was a lot like Boyd, I wouldn’t have believed you. But now, decades later, I observe with irony that I have evolved into a lazy hedonist who’d rather play or party than work.

I guess he was a good influence, after all.

When we die, we usually leave a lot of unfinished business for our friends and family to clean up. I did my best to help Boyd’s family deal with the aftermath. I remember sitting in the office in his home, searching through the desk drawers and file boxes, for specific financial and legal documents, most of which I never found.

What I did find were dozens and dozens of small boxes of stick matches from a wide array of expensive restaurants, each containing the remaining half of a long-ago smoked joint. 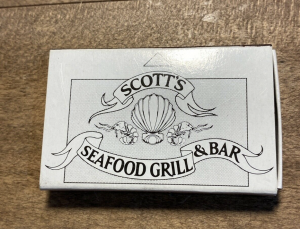 Categories: I Am the Light, He is the Shadow.
« The Professional is the Guy Who Can Do It Twice – Chapter Sixteen
Progress – Chapter Nineteen »