Few characters in American History are as deified as George Washington. In grade school, I found him to be one of the most boring people in the social studies textbooks. These books failed to convey even a smattering of the man’s panache or spirit. They declared that General Washington was revered by his troops, but offered not one insight into the vivacity that made this guy the “the Father of his Country.” He is placed so high on a pedestal that you can’t even see his humanity. According to the school textbooks, Washington, the man, was as wooden as his teeth. (They were actually made of ivory, but that’s another story.)

Perhaps professor Charles V. Willies was thinking of Washington when he wrote these words: “By idolizing those whom we honor, we do a disservice both to them and to ourselves. We fail to recognize that we could go and do likewise.”

American textbooks contain such watered-down versions of American history it is no wonder students find them boring. All the characters are one-dimensional. All the good parts have been excised. School textbooks publishers, in their effort to remove any sentence that might offend any member of any school board in any one of the fifty states, have sanitized American history to the point of sterility.

“The difficulty, of course, with this philosophy,” W. E. B. Du Bois explained, “is that history loses its value as an incentive and example; it paints perfect men and noble nations, but it does not tell the truth.”

Consequently, schoolteachers are really hobbled by these textbooks when they attempt to interest their students in American History. And this creates a business opportunity for me: I have performed my Singing Through History! school assemblies for over one and a half million K-12 students in 48 states. School principal’s say that I have a knack for turning children on to history. This might even be true. But there’s still a lot of American history that is too politically incorrect to share at a 21st-century school assembly. 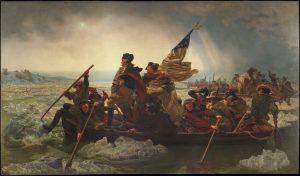 On a parade ground in downtown Manhattan, on July 4, 1776, General George Washington’s army of twenty thousand volunteers listened while the document known as the Declaration of Independence was read aloud. These sons of farmers, fishermen, craftsmen, and merchants had no training as soldiers. Many were illiterate. Their average age was eighteen and a half.

And across the bay on Staten Island, fifteen thousand British and Hessian troops prepared for battle. These soldiers were the finest, best-trained troops in the world at that time. The American volunteers assumed that this war would be over before the end of the summer and that they’d go home to their farms and their families in time for the harvest.

But General Washington moved his Virginia riflemen to Brooklyn, where the British cornered them and killed over five hundred. Then the British warships sailed up the Hudson River and took Manhattan. Over four thousand of these young American soldiers surrendered; thousands more deserted, disappearing into the woods of Westchester County. Washington fled with his remaining troops, south through New Jersey. The British followed him, slaughtering his army of volunteers. It was a disaster.

In December of 1776, Washington had only forty-eight hundred volunteers left – less than a quarter of the troops he’d started with in Manhattan six months earlier. He brought what was left of his army across the Delaware River into Pennsylvania. His men, now dressed in rags and worn out shoes, were starving. In was raining and very cold. Morale was extremely low.

Washington needed food, clothing, blankets, ammunition, and cannons – all of which could be found at the Hessian base camp, across the river in Trenton. So, on Christmas Day, in a surprise move, Washington planned to re-cross the Delaware in the darkness and attack the Hessians from three directions.

But the rain turned into icy sleet and the river was full of chunks of ice. Unbeknownst to Washington at the time, two of his commanders had lost their nerve and two-thirds of his remaining forces never crossed the river. He surveyed his 900 half-naked volunteers, shivering in their thin, wet blankets on the Pennsylvania shore. It didn’t look very promising.

Washington proceeded with his plan to attack before sunrise and surprise the Hessians while they slept. After midnight he learned that less than half his army had crossed the river. He realized he couldn’t attack in the darkness. He needed to get across the Delaware River and assess the situation. It was a very tense moment and his troops were genuinely frightened.

General Washington was, in fact, known for his forthright language and whatever he said at that moment broke the tension. Men on the dock whispered to one another, “What did he say?!?” and the cold, soaked, dispirited soldiers began laughing, hysterically.

Anyone who has ever served in the military has experienced this propensity for gutter language in situations in which women and children are not present. More than a dozen people, present or close, remembered that these were Washington’s exact words, though their accounts were written months or even years after the fact.

A few hours later, just as the first colors of dawn appeared in the sky, the filthy, freezing half-naked, bearded, and bedraggled American troops encircled Trenton and captured the Hessian camp without losing a man. Not a shot was fired (flintlock muskets are useless once they get wet).

And the rest is history.

I wish the “Ox” Knox story had been in my fifth-grade social studies textbook. Had I read this story then, it would have greatly increased my interest in American History and my understanding of Washington’s capacity as a leader.

As an adult, I have read numerous works of non-fiction about the life of Washington. Few stories give us a glimpse of the man as a human being and the “Ox” Knox story is, perhaps, my favorite. I think fifth graders across the land would be delighted by this story – don’t you?

But, here in the United States of America, it’s a sacrilege to put words like “fat ass” into the mouth of a hero like George Washington – that would be downright un-American (and politically incorrect, to boot). Imagine how the school principal’s telephone would be inundated with enraged calls from incensed parents, if I dared to tell this story at a school assembly.

And yet, it is an indisputable fact of history that without General Washington’s gift for locker-room jargon, the Revolutionary War might well have been won by the British!

Categories: Schools.
« Showmanship: The Persuasions Killed It
The Father of American Music »