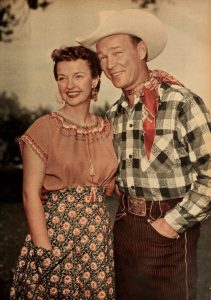 Stewart Barbee’s family moved from Portsmouth, Virginia, to Encino, California, north of Los Angeles, in the early 1950s. The San Fernando Valley was still considered “the country” in those days ­– wide open spaces, citrus orchards, and farmland. The Barbees lived in a classic ranch style house. Encino was a movie town populated by people who worked in the film business. Stewart and his two brothers found themselves the classmates of the sons and daughters of writers, directors, producers, and actor

“My very first day of school and Encino grammar school, a young red-headed kid came up to me before they even the first bell rang for class, and he said, ‘My dad is Roy Rogers.'”

And Stewart said, “Yes, he is!” And the boys argued back and forth.

“Then he sat down on the playground,” Stewart recalled, “took off his cowboy boot, stood back up, and hit me in the nose with it. And the next thing I remember, he and I were standing on opposite sides of the principal of the grade school. This is in the first grade, I think.”

Stewart’s mother was summoned to the principal’s office. Stewart had a bloody nose. Dusty had a black eye. Trying to be helpful, she asked the principal, “Would you like me to drive the other boy home?”

“If you wouldn’t mind,” the principal replied. So, Mrs. Barbee drove Stewart’s classmate to his family’s ranch in the valley. It turned out he really was Dusty Rogers, the son of Roy Rogers. 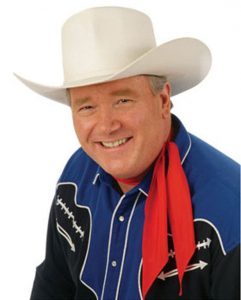 In the 1976, Stewart Barbee was working as a cameraman on a Flip Wilson television special called Travels With Flip, directed by his older brother, Chuck Barbee. Flip Wilson, one of the biggest starts in TV at that time, liked to take road trips in his Rolls Royce convertible. And Flip liked to make jokes about Roy Rogers.

So, as part of the Travels With Flip itinerary, the crew went out to Apple Valley, California, to visit Roy Rogers. While the crew was filming at the Rogers ranch, Roy’s son Dusty showed up. Stewart hadn’t seen him since first grade. He’d grown up to be a very large, middle-aged man.

Dusty smiled broadly and said, “No, he isn’t.” 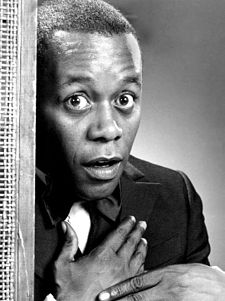 In January of 1988, I was working on a tv commercial selling Stove Top Stuffing. We were shooting on a soundstage at EUE/Screen Gems in the San Fernando Valley. The spot starred one of my childhood heroes, comedian Flip Wilson, in drag as his popular character, Geraldine Jones.

When I was in grade school, Flip Wilson was a superstar who hosted his own weekly variety series The Flip Wilson Show (1970-1974) which, at one time, was the second highest-rated show on network TV.

But in January of 1988, Flip Wilson was a mess – overweight, middle-aged, out-of-shape, swollen from alcoholism, and strung out on cocaine. It was heartbreaking to see him up close and personal, unwell and in such a poor condition. The man looked like he was all used up.

Back in September of 1985, CBS had launched a tv series called Charlie and Company in response to NBC’s incredibly popular The Cosby Show (1984-1992). Charlie and Company, starred Flip Wilson and Gladys Knight. Eminently forgettable, it was cancelled after one season and that was the end of Flip Wilson’s television career.

Emerging from the dressing room clad in his elaborate Geraldine wardrobe and wig, he struggled to work before the camera. Seemingly distracted and at times confused, under the bright lights, he was generally out-of-it and unable to remember his few lines.

He kept repeating, only half-jokingly to anyone who happened to meet his gaze, “Now I am gonna get paid for this, right? I mean, the money has to be in Columbia by Tuesday!”

Mr. Wilson was surrounded by the members of the crew – all fans who held him in the highest esteem and who were all silently cheering for him. But he was just too ill to perform. He couldn’t get it together. At noon we took a lunch break and I personally brought him an appetizing plate of food that had been prepared by the cater, especially for him. He shooed me away with the wave of his hand, wearily shaking his head. The food held no appeal for him.

“Can you get me a beer?” he asked quietly, his eyes directed at the floor. I handed him a cold can of Budweiser from the ice chest we had placed in his dressing room early that morning.

We didn’t get any useable footage and shortly after lunch, we called a wrap. Mr. Wilson was sent home in a limousine. I don’t think that spot ever aired.

Sometimes one’s involvement in a film shoot allows them a momentary glimpse of the simple humanity of a well-known celebrity. I never forgot seeing the great Flip Wilson when he was at the bottom of his game. To the best of my knowledge, this was the last tv commercial job of his career.

As General George S. Patton, Jr. once said, “All glory is fleeting.”

Categories: I Am the Light, He is the Shadow.
« The All-Star – Chapter Ten
The Old Master – Chapter Twelve »